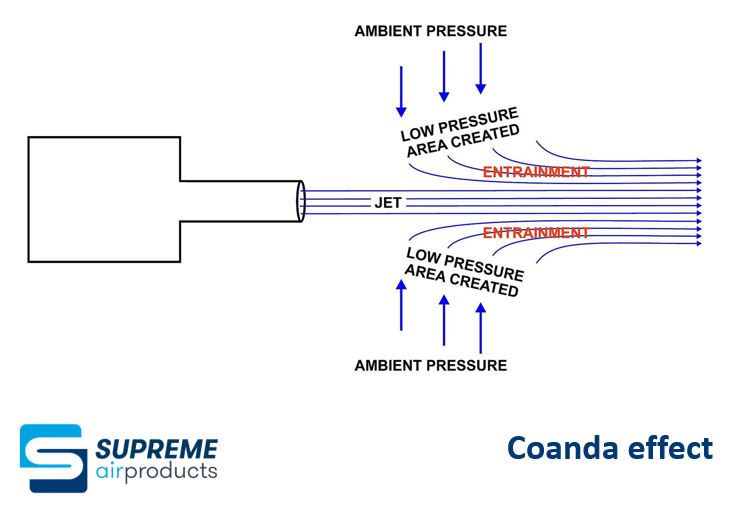 The Coandă effect is the tendency of a fluid jet to stay attached to a convex surface. It is named after Romanian inventor Henri Coandă, who described it as “the tendency of a jet of fluid emerging from an orifice to follow an adjacent flat or curved surface and to entrain fluid from the surroundings so that a region of lower pressure develops.”

Coandă was the first to recognize the practical application of the phenomenon in aircraft design. An early description of this phenomenon was provided by Thomas Young in a lecture given to The Royal Society in 1800:

The lateral pressure which urges the flame of a candle towards the stream of air from a blowpipe is probably exactly similar to that pressure which eases the inflection of a current of air near an obstacle. Mark the dimple which a slender stream of air makes on the surface of water. Bring a convex body into contact with the side of the stream and the place of the dimple will immediately show the current is deflected towards the body; and if the body be at liberty to move in every direction it will be urged towards the current.

A hundred years later, Henri Coandă identified an application of the effect during experiments with his Coandă-1910 aircraft, which mounted an unusual engine he designed. The motor-driven turbine pushed hot air rearward, and Coandă noticed that the airflow was attracted to nearby surfaces. In 1934 Coandă obtained a patent in France for a “method and apparatus for deviation of a fluid into another fluid.” The effect was described as the “deviation of a plain jet of a fluid that penetrates another fluid in the vicinity of a convex wall.” The first official documents that explicitly mention the Coandă effect were two 1936 patents by Henri Coandă. This name was accepted by the leading aerodynamicist Theodore von Kármán, who had with Coandă a long scientific relationship on aerodynamics problems.

A diagram of a generic engine that harnesses the Coandă Effect to generate lift (or forward motion if tilted 90° on its side). The engine is approximately bullet or inverted bowl shaped, with fluid being expelled horizontally from a circular slit near the top of the bullet. A small step at the lower edge of the slit ensures that a low pressure vortex develops immediately below the point where the fluid exits the slit (see Diagram 5). From there on the Coandă effect causes the sheet of fluid to cling to the curved outer surface of the engine. The entrainment of the ambient fluid into the stream flowing over the bullet, causes a low pressure area above the bullet. This, together with the ambient (“high”) pressure below the bullet causes lift, or, if mounted horizontally, forward motion in the direction of the apex of the bullet.

A free jet of air entrains molecules of air from its immediate surroundings causing an axisymmetrical “tube” or “sleeve” of low pressure around the jet (see Diagram 1). The resultant forces from this low pressure tube end up balancing any perpendicular flow instability, which stabilizes the jet in a straight line. However, if a solid surface is placed close, and approximately parallel to the jet, then the entrainment (and therefore removal) of air from between the solid surface and the jet causes a reduction in air pressure on that side of the jet that cannot be balanced as rapidly as the low pressure region on the “open” side of the jet. The pressure difference across the jet causes the jet to deviate towards the nearby surface, and then to adhere to it. The jet adheres even better to curved surfaces, because each (infinitesimally small) incremental change in direction of the surface brings about the effects described for the initial bending of the jet towards the surface. If the surface is not too sharply curved, the jet can, under the right circumstances, adhere to the surface even after flowing 180° round a cylindrically curved surface, and thus travel in a direction opposite to its initial direction. The forces that cause these changes in the direction of flow of the jet cause an equal and opposite force on the surface along which the jet flows. These Coandă effect induced forces can be harnessed to cause lift and other forms of motion, depending on the orientation of the jet and the surface to which the jet adheres. A small “lip” on the surface at the point where the jet starts to flow over that surface enhances the initial deviation of the direction of flow of the jet, and it subsequently adheres to the surface. This results from the fact that a low pressure vortex forms behind the lip, promoting the dip of the jet towards the surface.

The Coandă effect can be induced in any fluid, and is therefore equally effective in water as in air. Supreme Air Products use this technology in several of their products such as the Air knife systems, vortex tube systems and our round air wipe blow offs.